My Raspberry Pi arrived a few days ago and I've been busy experimenting ever since. I initially tried Debian “squeeze” as recommended on the Raspberry Pi website. The distro was fairly easy to setup using the dd command in OS X Terminal to copy the Debian image file to the SD card (the instructions on the Raspberry Pi Wiki are fairly comprehensive).

I was using a fairly cheap SD card that kept getting locked every time I slid it into my MacBook Pro so I ended up taping the lock into the off position (might help someone if they keep getting permission denied when trying to write via dd).

The device booted in sub 30 seconds and once logged in you can start the window manager by typing 'startx'. It was unable to detect the correct resolution of my HD TV but otherwise worked without a problem. I enabled SSH through the command line and played around with some of the pre-installed applications.

My aim for the Raspberry Pi was a media center with the overall goal of having one in the living room, kitchen and bedroom meaning that wherever I am in the house I can stream my media. I was led to Raspbmc, a Debian based OS running XBMC.

The software is in early beta (as with a lot of software surrounding the Pi) but has a downloadable image and a similar setup process to Debian "squeeze". 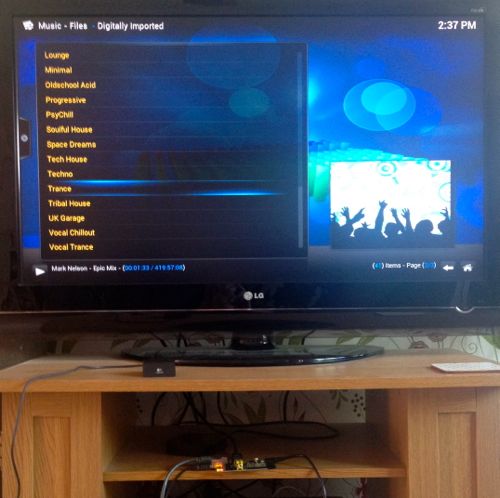 On booting for the first time Raspbmc downloads and installs all the necessary files for XBMC, a process taking about 15mins. I was then able to set the correct resolution for my TV and install plugins for Internet Radio and BBC iPlayer (I installed this from a flash drive). SMB didn't work for file sharing (and crashed the Pi) but I'm sure this will be fixed in a later version.

It's early days for the Pi but there is a growing community, from the Raspberry Pi website, to the Element 14 forums to our local Lug - all seem very interested in seeing the Pi being a success.

More to come on the Pi soon...