In September I bought the Acer Aspire One, unfortunately being a cheapskate I chose the crippled SSD version and have regretted the slow write speeds ever since. At first I worked with the Linux Distro included however it was hard to upgrade and my 3G Dongle was poorly supported, then I opted for Windows XP however over the past couple of months I've grown frustrated with the slow loading and 'jelly mode' that the whole OS seems to enter when trying to write to the SSD.

I've tried various hacks including loading Firefox from a RAM disk but they only help so far. I was considering giving up and selling my Aspire One for the more powerful and sexier yet more expensive HP Mininote. This was until Ubuntu 9.04 was released.

It's well documented on the Ubuntu site that the Aspire One is well supported however it was my 3G dongle that concerned me. Ubuntu took about 30mins to install after using the Windows utility to write the image to my flash drive. 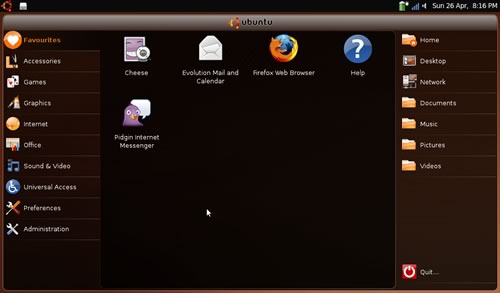 Ubuntu Netbook Remix
The interface of Ubuntu 9.04 Netbook Remix has been specially designed for a small screen and works surprisingly well. Navigating through complex menus with a touchpad has always been a pain so simple side tabs and large icons works excellently.

Fortunately when plugging in my 3G adapter I was asked about my country and provider. It automatically added the interface to my network icon and I was able to connect quickly.

Ubuntu has breathed new life into my netbook and has made it useful again. It fits in nicely with my OS X and Windows Network and provides enough features at a good speed to give an improved experience.

I'm looking forward to trying out the new version in the next few days - great review thanks.