It's been snowing all afternoon here in Shrewsbury and it's just taken me 90mins to drive home from town (a journey that usually takes 10mins). There is gridlock everywhere and noone is driving over 20mph.

I've not had much chance to take some photos and I don't have a waterproof cover for my camera but here are some of the photos I managed to get from my house including Shrewsbury Business Park. 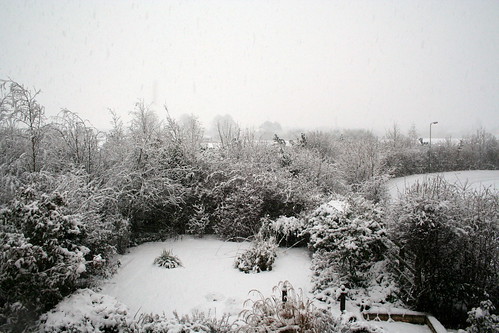 This is the view from the front of my house, usually you can see the south Shropshire hills, today everything is white. 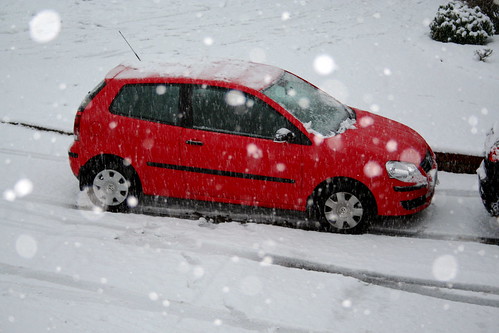 Here is my car, I had just driven home in it so there was not too much snow. 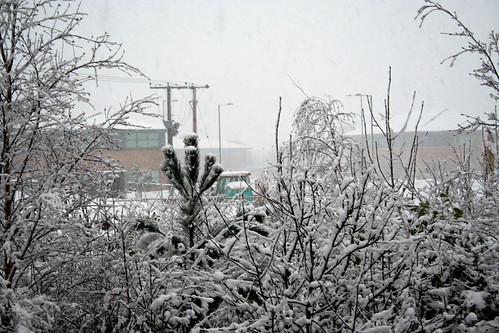 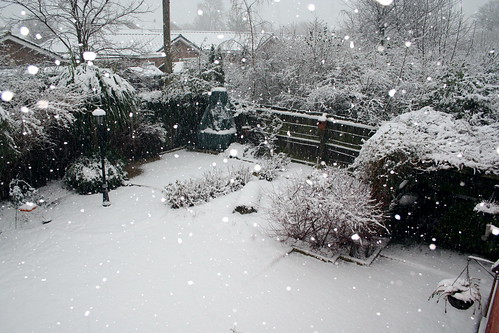 Here is my back garden, usually you can see the different areas including the lawn, patio, gravel and woodland. Today is it all white. 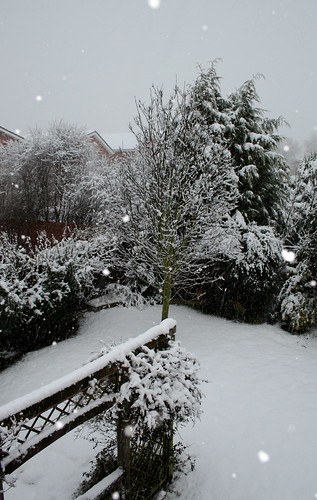 Finally here is a the other side of my back garden.

I will try to get some more photos tomorrow when its light and the snow has stopped!

This evening Apple have previewed the iPhone, a PDA like device that sports a multi touch screen, PC and Mac syncing capabilities and some amazing applications.

The phone will be available in the US from June priced at $499 for the 4gig and $599 for the 8gig. It should be in the UK by the forth quarter but it is unknown which network will carry it and at what price.

The phone has been rumoured for years however the hype has been growing over the past couple of months with several high profile characters stating their reputations on the announcement today.

Apple did not announce any information on their upcoming OSX 10.5 Leopard release or iLife/iWork 07. A full log of todays keynote speech can be found on engadget.

My contract runs out sometime in the forth quarter of this year so you can guess what I will be replacing my MDA Vario with!

How To Find Me Online

With the huge number of social networking sites out there its easy to lose track of everything you have signed up to, here is how to find me on all the ones I'm signed up too:

I will add more as I join more sites and remember more!

I got my exam results back yesterday and I got a First in Computer Science BSc!! I'm really pleased with the result and its great after 3 years of hard work. Congratulations to everyone who also got their marks, hope they were what you wanted.

My Mac has been fixed, it had a faulty power supply fortunately it was under warranty. I am away next week working on a CSI Summer School in Coventry so wont be online. My first week at work has gone well, it has shown me how much I didn't know but I have learnt lots this week about Server 2003 and Exchange.

Tomorrow I start my new job in Shrewsbury so wish me luck. Really looking forward to it so should all be good! I'm still waiting for my exam results, they should have been released on Friday but there is a problem with one of the modules I am doing so anyone doing that module is yet to recieve results. Hopefully should have them early this week.

I have a new phone too, the MDA Vario on T-Mobile. I'm still on my quest for the perfect phone so hopefully this will be the one, will try to get a review up soon. My contract with Orange runs out shortly and whilst they have been good their range of phones to upgrade to didn't really excite me, hence the move. At least they were better than my previous contract with BT Mobile who even after constant phone calls could never get my answerphone to work even after a year.

My iMac seems to have broke so will need to go in for repair this week, fortunately its still under warranty so it wont cost me anything to fix. It will mean work to ImAFish and Switchweb will be slow for the next couple of weeks but I can do most administration from my laptop.

After three tough and hard working years I have completed University! I

Tuesday night was our University Summer Ball. I haven

"Source Radio has been the starting point for many rising stars but one show has stood out this year for its creative content and unique features. The Monday Night Show with Pete White, Ben Powell and Chris White has been on air since October every Monday night between 6pm and 8pm. The almost famous tag line “Power Pumping Passion” is one the defining points of the show."

We started the show simply out of curiosity for Source Radio and it was an instant hit because of the humour and entertainment we brought to the station. From early on we made an effort to discuss student issues on air where appropriate. In November we debuted our version of on air dating, people would send in profiles and we would read them out on air making the occasional joke. It worked really well and people found it really entertaining and we even matched some people up!

By December we had edited out our best bits and put them on the Internet for others to listen. The feedback we had was great, allowing people who hadn’t been able to listen to the show experience it as well giving our regulars some of the funniest moments again. The editing wasn’t easy and took hours to shift through our previous shows but it was well worth it just for the exposure it gave us.

January came and we wanted to promote the show even more as well as cover more student issues. This is when I came up with the idea to invite the Vice Chancellor Madeline Atkins on the show for an interview. She accepted our invitation and we started to plan questions and features. When we told the rest of the stations members about the VC interview we had planned there was almost a sense of shock but they realised a great opportunity for the station. This VC interview was not the only planned content for the show we also had an exciting new game show. Being a student station we thought we could push the boundaries slightly more than other stations, which is why we thought of “Feed Chris”, each week we would ask Chris three questions and a bonus question, for each question he got right he got a meal on Tuesday. If he got none of the questions right he didn’t get to eat! While of course he never went through with it and the questions were rigged against him it provided a lot of spontaneous entertainment.

Our first Interview that we mocked up was with Kiefer Sutherland (Jack Bauer from 24), being heavy 24 fans and the new series about to start we made a very funny interview with some sound clips from 24, the interview is still available online. We were also fortunate with the help of Bill Bennett to get an interview with Tim Westwood for the show when he was DJing in the SU. Bill got Westwood to “pimp” a toy car as well as asking him about Coventry and the Students, the Westwood interview is also available online. In February our Vice Chancellor interview came round, we spoke for about an hour covering a range of topics including the new student centre, crime on campus and the future of the University. We had some great feedback about the interview from students and staff as well as over 600 downloads for listen again of the show. The show still continues on a Monday Night and has recently played sets from this year’s Trance Energy Festival in Holland. You can listen in between 6-8 on www.sourceradio.co.uk, if you want to listen again to any of the interviews or best bit segments visit www.imafish.co.uk.

*This article was featured in Coventry University's Source Newspaper in the March Issue.