Whichever distribution you finally decide on you will need to install it on your machine in order to take full use of the operating system. Once you have downloaded or brought your distribution and it is on cd the best way to start the installation is to boot it from the cd/dvd. This is done quite simply; enable the cdrom as the first boot device in the bios then put the CD in the drive and reboot your computer. Whichever distribution you install will probably give you a number of options.

Redhat and Mandrake will require you to change the partitions yourself this is normally the only difficult stage on the installation and I would recommend you use a program such as partition magic as described in the previous article. Once you have gone through the simple installation procedure you are ready to start copying files to your hard drive.

This can take anywhere between 20mins to 2hours depending on the speed of your computer and how much you install. A typical desktop system with office will take around 2gbs of hard drive space so there is quite a lot of copying to be done! After everything has been installed the installer will run a number of configuration programs to configure different bits of hardware such as network cards, graphics cards and printers.

Most devices will automatically be configured properly however you do have the option to tweak any settings you wish at this point. Its best if you look up your distributions guide while installing too as this guide is quite general into installation through out the major Linux distributions. Installation is the most nerve racking part of getting Linux but is also one of the most important parts.

Today I got my copy of Unreal Tournament 2003 after ordering it online a few days ago. Not only did this save me a trip into town but also saved me almost ?10. After a lengthy install time and 2.5gig of my hard drive gone I was ready to play. My first impressions we great, the game is easy to use, easy to play and didn?t take too long to load (takes about as long as the original).

The graphics are stunning, the little effects make it look nice like swaying grass, moving clouds and more realistic gas textures. Though it took me a graphics card update to stop the larger death match levels from stuttering, but the 10mb download was worth it in the end with everything running very nicely on my GeForce mx420.

The overall play of the game is similar to that of Unreal Tournament, the graphics are a massive improvement and the guns have been upgraded. They have replaced the old sniper rifle with a more advanced weapon that still gives some nice headshots. The other amendments are that of the extra packs you can pick up. These now include bigger health packs and adrenaline, which if you collect enough gives you special abilities such as running fast.

The one feature I did turn off straight away was weapon bob, which to be honest just got annoying and made you feel like you were on a ship. It also took me a while tweaking the graphics settings to get everything working smoothly while trying to get as much out of my card as possible, however this normally has to be done for most games.

I was also disappointed with the lack of outdoors maps, this will probably be left more to one of the mods such as strike force but will mean a hefty download for me. The game is still in very early days, I had a quick look on the web for maps and couldn?t find anything yet the same I found about support which was also very limited. I can see ut2003 lasting for the next 2-3 years like its predecessor did, however it would be nice if the game was to get popular quicker then the original as it did seem to have a slow start.

Overall I think ut2003 is a very nice game which has great potential and flexibility within itself that can hopefully become a very successful and popular game. I have decided to give it 9/10.

2009 has been a tough year for Bloggers to make money compared to 2008 but there have been opportunities and ad networks have matured to become better accepted by marketers. Gone are the large amounts of money for private ad sales in favor of link exchange agreements and PPC amounts have tumbled.

Here is how some of my sites have fared over the past year for monetization.

Sponsored reviews have fared well in 2009 with advertisers keen to show their products in a natural way to consumers and search engines. They are often criticized for degrading the quality of a blogs content but I've found a sponsored review mixed in between a number of good quality posts to perform well. Strict new rules for Bloggers in the US may mean some good opportunities for non-US blogs in 2010.

It's been a rough year for Pay Per Click marketing, the amount made per click in 2009 has plummeted on a number of my sites, hopefully 2010 will see the PPC market performing much better.

Google Adsense - Has been a reliable income throughout the year though relies heavily on people clicking high value ads. Adsense performed well on my iPodHistory site before I sold it however has failed to do well on 12stix or ImAFish.

Clicksor - Has replaced Adsense on a couple of sites where they are not suitable for Adsense or have been banned. The amount per click is fairly poor even compared to Adsense.

Monthly ads are where you are paid a set amount per month for an advert though these often base prices on Google Page Rank and Alexa ranking. There are a number of key players:

TNX - Has been a consistent payer throughout the year but relies on paying a small amount for a lot of adverts.

LinkLift - Recently out of beta, LinkLift is one of the newer players but has shown good growth throughout the year.

Linkworth - Advertising revenue has dried up significantly from Linkworth over the past year.

This time last year there was a lot of money for private ad sales however this has declined significantly. Companies are now turning to link exchange programs rather than paying directly for ads. Even the better paying gambling sites have been cutting back on their advertising budget.

Hopefully we are over the worst in 2009 with the slump in the advertising market. There are plenty of opportunities out there for Blog monetization but Bloggers need to work that extra bit harder to attract the advertisers.

Broadband has been becoming increasingly popular over the past year and it has now reached 1million subscribers. The numbers of people and businesses signing up for broadband has trebled since the start of 2002. Oftel estimates that 20,000 connections per week are being installed. Broadband can run upto 10 times faster then a usual dialup connection and there is no 2-hour cut offs like a lot of the major dialup ISPs impose.

The increase in broadband is said to be because of file sharing services such as Kazaa and GNUtella, which let users share music for free. Broadband enables them to download music at a much faster speed. This is in dispute in America in the courts as the music industry has said it is loosing lots of money, though this cannot be proved as America is suffering from a Recession. The UK on the other hand saw record sales increase last year, which some people say that people are still buying music if they like a song they download.

The music industry has replied by trying to shut down services such as Kazaa and was successful in shutting down Napster 2 years ago. Though Napster has tried to relaunch itself as a legitimate service the record industry are still not happy. BT have spent over ?30million on advertising over the past few weeks and there advertising campaign will continue on into the next few weeks.

BT who are not the cheapest of broadband providers are trying to get as many people to sign up for there service rather then their competition which includes Freeserve, AOL and F2S. Freeserve have said this is unfair competition as BT are a much bigger company and have a lot more funding from other areas of there business. Though not everyone is happy especially people living in rural areas as many of them cannot get broadband and unless they have big enough support for broadband in their area the chances of them getting it are very small.

In the UK most people currently get broadband access via cable suppliers such as NTL and Telewest, although the numbers using ADSL, which comes via phone lines, is rapidly catching up. Though the UK is still behind a lot of its fellow countries the government is looking to have ?broadband Britain? by 2005.

We spent an evening on Chat Roulette - this is what we came across: 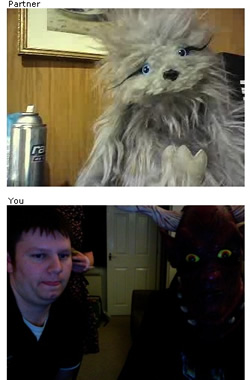 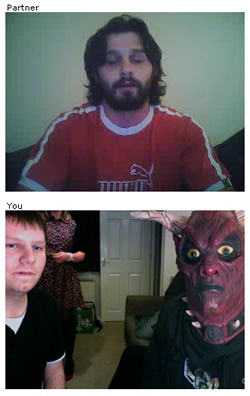 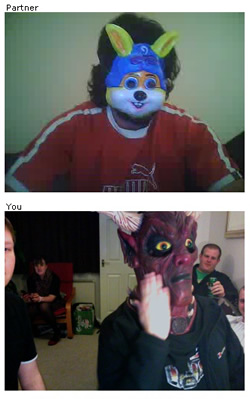 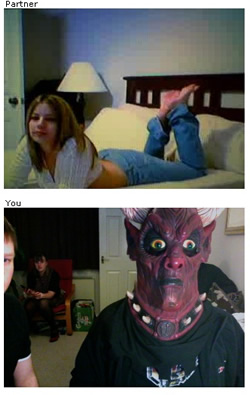 First of many hotties. 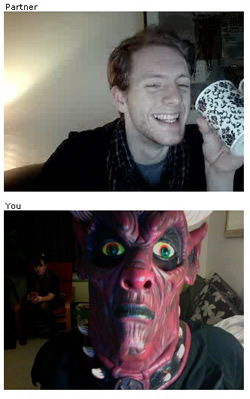 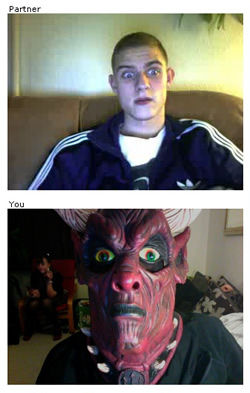 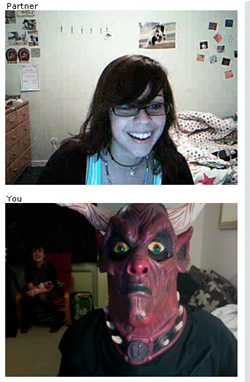 The Devil was recruiting. 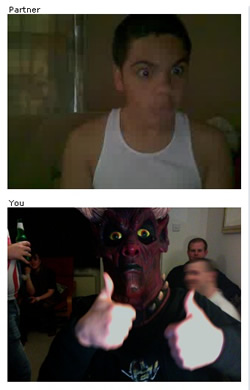 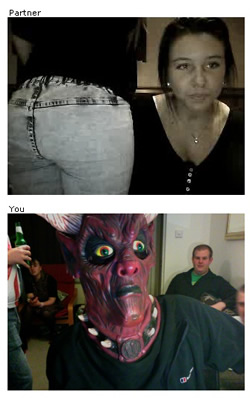 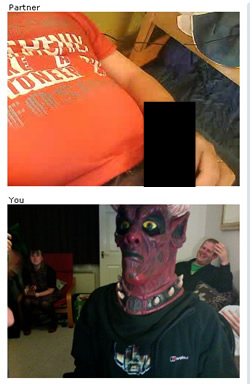 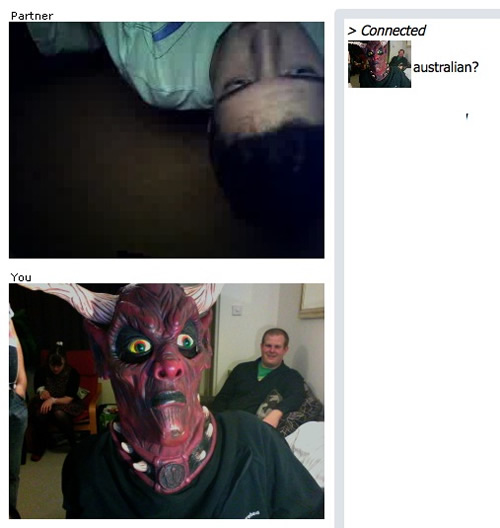 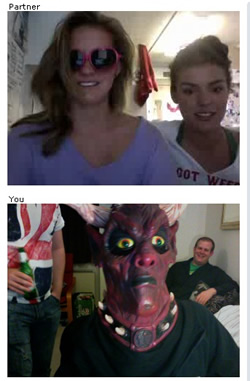 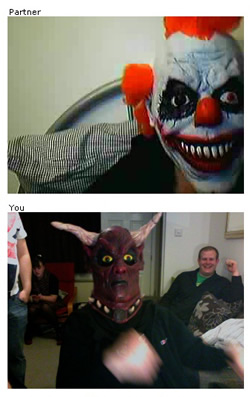 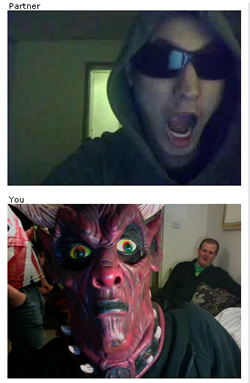 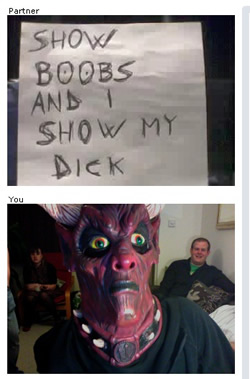 One of many well designed signs. 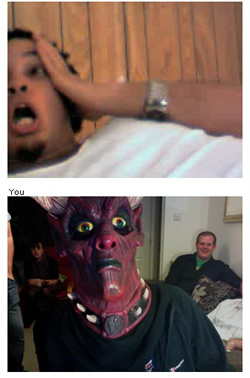 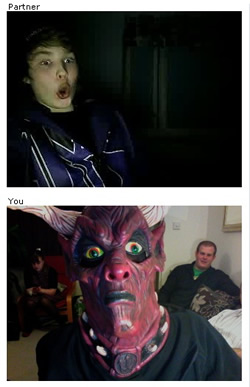 They made the Devil laugh. 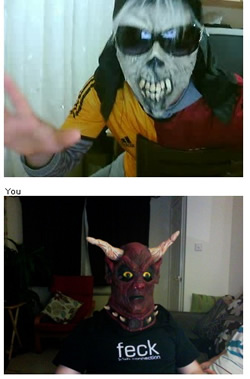 You cannot scare the Devil. 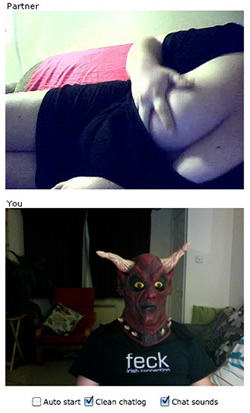 The Devil is amused.